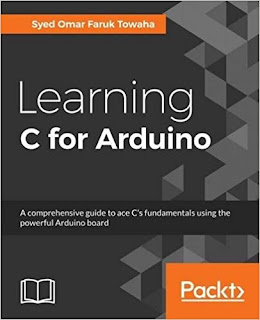 Key Features
Book Description
Are you excited to explore the small yet powerful Arduino board, but are you wondering how to explore it without having programming and/or microcontroller skills? Then this book is what you are looking for. It will not only help you explore the world of Arduino with C programming, but also aid you in controlling your Arduino board.

The book will start with the fundamentals of C programming and programming topics, such data types, functions, decision making, program loops, pointers, and structures, with the help of an Arduino board. Then you will get acquainted with Arduino interactions with sensors, LEDs, and autonomous systems and setting up the Arduino environment. Moving on you will also learn how to work on the digital and analog I/O, establish serial communications with autonomous systems, and integrate with electronic devices. By the end of the book, you will be able to make basic projects such as LED cube and smart weather system that leverages C.

What you will learn

Email ThisBlogThis!Share to TwitterShare to FacebookShare to Pinterest
label： books, C and C plus plus, Reference