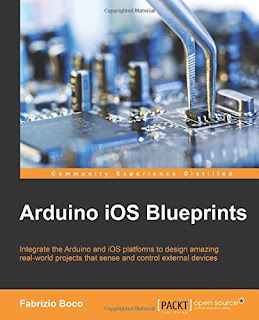 About This Book
Who This Book Is For
This book is a technical guide for Arduino and iOS developers who have a basic knowledge of the two platforms but want to learn how to integrate them. The book includes a lot of external references to additional documentation and learning materials, so even if you are less experienced, you can improve your knowledge on the subjects covered.

What You Will Learn
In Detail
Arduino and iOS devices have reached wide popularity due to their simple way of use and flexibility. Hence, their integration opens up new opportunities, allowing everyone to build devices that are extremely useful in everyday life.

You will first learn how to control Arduino from an iPhone or iPad by writing the Arduino sketch, the iOS application, and integrating everything together via Wi-Fi or Bluetooth BLE. You will then learn about various components that interact with the Arduino such as digital and analog I/O, Wi-Fi shield, Bluetooth BLE, SD card, OneWire, I2C, and so on. You will also learn about iOS, which includes the development of an application from scratch, GUI design and MVC, UIKit, iOS sensors, TCP and Bluetooth BLE communication, and more.

All the projects are described in detail, providing you with a learning tool, not just some sketches or some iOS code to copy.

Style and approach
This is a project-based book with a step-by-step guide that covers everything that you need to build an Arduino-iOS project, right from defining the basic requirements to the coding and testing the entire project. Each chapter ends with ideas on how to improve the project and to constantly learn the topics covered.