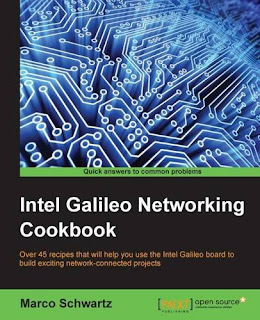 Who This Book Is For
If you have already worked on ARM boards like Arduino, but now want to learn Intel Galileo, then this book is for you. Knowledge of C programming language is required.

What You Will Learn
In Detail
Arduino is an electronic prototyping platform used by millions of people around the world. Intel Galileo is fully Arduino compatible; hence it combines the high performance of Intel with the simplicity of Arduino Software Development Environment. This makes it the ideal platform to build exciting projects, especially in the field of web-based connected applications and the Internet of Things.

The book features several recipes all based on the Intel Galileo board, and that exploit the powerful features of the board. Each chapter explores a given field using the Galileo board.

The book is mainly divided in three parts. The first part is all about learning the basics of the Intel Galileo board, but it uses some of the powerful features of the board such as connecting external sensors and complex hardware devices, compared with more basic Arduino boards.

Then, the book dives into the topics related to networking and the Internet of Things. You will learn how to run a web server on the board and log data using a cloud-based service.

Style and approach
This book contains exciting recipes that will help you create projects using the Intel Galileo platform to build systems in various domains like local networking applications, the Internet of Things, and home automation. Each recipe is explained in a step-by-step fashion, always starting with the assembly of the hardware, followed by basics tests of all hardware components. At the end, an exciting project is built using the knowledge acquired in the rest of the book.