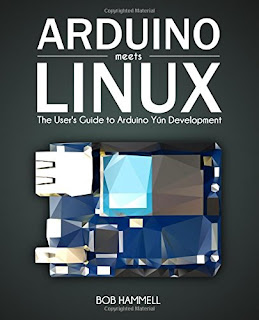 Build the next generation of connected projects.

The Yún is one of the most powerful and flexible hardware development boards in the Arduino range. It combines the ease-of-use of the Arduino platform, with the power of a 400 MHz Atheros AR9331 Wi-Fi system-on-chip (WiSOC) that runs Linux.

But if you are not experienced and confident in working with Linux-based operating systems, it may be difficult for you to use the Yún to its full potential.

Bob Hammell is the author of popular Arduino learning resources, such as Connecting Arduino: Programming and Networking with the Ethernet Shield. In this book, he guides you through all of the Arduino Yún’s features and explains how to make use of this unique board.

Using interesting and fun examples, in Arduino Meets Linux: The User’s Guide to Arduino Yún Development you can learn how to:
Whether you are an experienced Linux developer looking for specific details on using the Arduino Yún or a beginner who has never used Linux before, you can find all of the key information that you need in this book.

With the Arduino Yún, you can take your Arduino projects to the next level. This book shows you how.