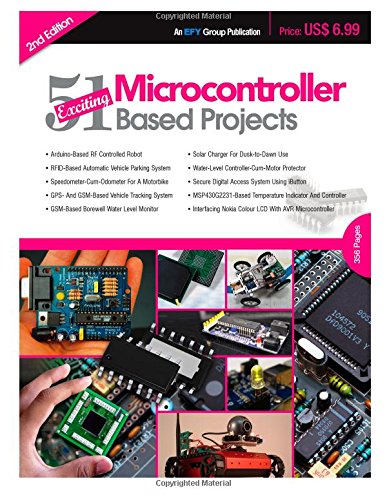 This Book is collection of 51 microcontrollers-based projects, which appeared in Electronics For You from 2001 to 2013. It is a compilation of 51 construction projects tested at EFY Labs. This is the second edition of the Microcontroller Based Project book. Therefore, it has all the materials covered in the first edition, and also includes 25 new projects with some new microcontrollers not covered in the first edition. This book, a collection of 51 microcontroller-based projects, which appeared in Electronics For You during 2001-2012 is brought out for the benefit of our new readers.The book has been divided into five sections same as in the first edition viz : Security Systems, Domestic Applications, Industrial Applications, Measurement, Display Systems and Robotics. However, many new projects have been introduced in second edition.